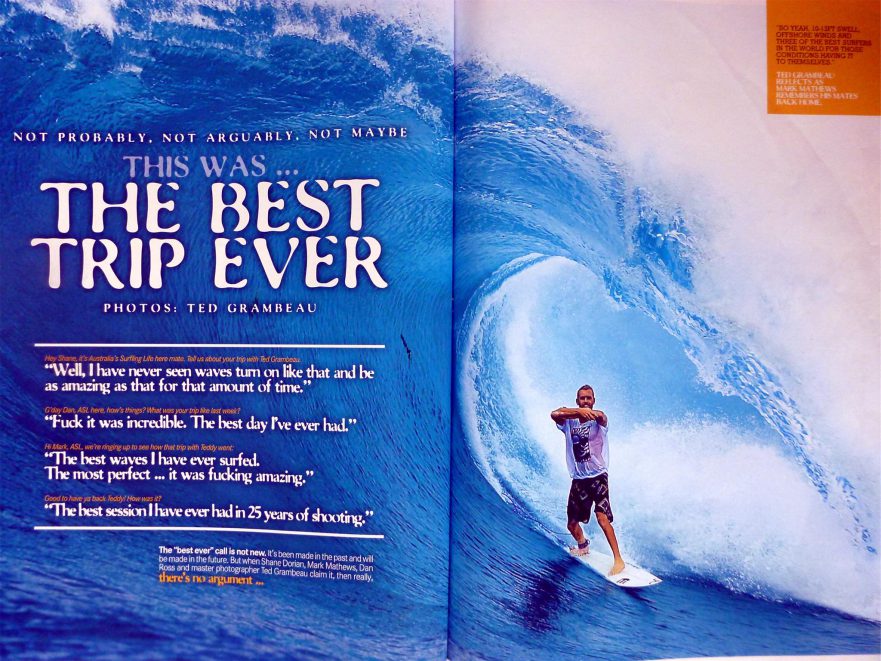 It has been 10 years since Shane Dorian, Mark Matthews (pictured here) and Dan Ross got the cover for Surfing Life shot by Ted Grambeau.

It is not every day you get a 22 full pages article and cover about a location or surfer. Claims were coming from some much respected characters in the surfing world. Not probably. Not arguably. Not maybe. This was the best trip ever. And one to which standards have been based when it comes to Pohnpei swells. There have been big swells, not bigger but a few just as good. Still, when people ask that questions about how good it was it always goes something like this… Was it as good as Shanes? Some things didn’t change much since. Shane Dorian still on top of the big wave surfing world with some of the best rides during this El Nino winter and Ted Granbeau still one of the top photographers who is always around any big deal surf event, swell or surfer.

The wave at Palikir also remains the same. The reef is still colorful and alive with lots of fish swimming around, the water is clean and warm. The wave is perfect from 2 to 12 ft. It is very user friendly up to 6 ft. faces and then it starts getting thicker by the feet as it grows in height. It does not close out in the end. It does not have a dry section. You can surf it at any tide, all day long.

United Airlines is still keeping Micronesia an almost exclusive destination. A bit further and more expensive to get to keeps it much uncrowded. An unreal reward for those who take that extra step. I would say everything the surf media tries to sell you as the surfers dream coming true funnels into Pohnpei. Warm, perfect, untouched, shades of blue and green and for most of it, uncrowded.

Some things have changed a little
Other waves have been found in Micronesia. When it comes to a north swell and light trades winds nothing beats Pohnpei for a few thousand miles to the east or west. We have fond a few more waves in Pohnpei. Not as reliable as Palikir (P-Pass) but waves that work on different swells and winds or when Palikir is too big.

Modern amenities have come to Pohnpei. New water front hotel with marina, sushi bar and grill and the Pohnpei surf Club are all steps from your room.
If we think about how the world is moving faster and faster and how places are being discovered for surf at a higher rate than ever, here at Pohnpei the surfer numbers have dropped, mostly I would say because of distance and airline rates. The hype is gone but the Pohnpei is better than ever. Sixteen years after I first surfed P-Pass and twelve years operation as the Pohnpei Surf Club numbers went up, down and then stabilized at around 15 surfer on island during the peak surf season and a lot less early and late season. Not unusual to find yourself with only a few guys out on a decent day.
We are really looking forward season 2016/17. La Nina during season 2010/11 was by far the best season we had with lots of swells and excellent winds. On our side we have the hotel and boats looking and working better than ever, the best local knowledge when it comes to surf, knowing where to go and what to do on the right day as location and weather go. The restaurant has been up graded and the bar is the place to be on island.
As soon as the first swell hits in October Australian photographer Simon Williams will be here to shoot every moment you have in the water. From November 18th to December 4th, the Surf Bunnies Janni and Sylvi will be here surfing with us. Both surf and have modeled fashion and sports with lots of articles including Playboy, FHM and many other magazines covers.
Did we mention we also like to fish?